Dragon Bloom is by the amazing stallion Rousseau out of a Flemmingh mare, Zalanta.  He is ¾ blood related to the 2008 Champion Stallion in Holland Ampere (birth name Ajong).  Ampere is the third in a row of Rousseau offspring to have won the Stallion Show, a feat never accomplished before.  Rousseau seems to be a nonstop producer of quality foal and Dragon is no exception. He was awarded First Premium competing amongst a huge class of tremendous high quality foals at the Iron Spring Farm keuring this September. Being selected for the Championship he was tied fifth with the colt who went on to win the Champion Dressage foal at Devon.

The KWPN-NA has given Dragon a prize for being the best foal of the Keuring Tour resulting from the 2007 KWPN-NA Stallion Auction.

Dragon is an good mover with a nice conformation and an excellent attitude. The jury found him very expressive, long lined, light footed and commented on his good use of the hind legs. In the Championship class more comments were made on his good shoulder, long legs and rectangular body.

Dragon has such a lovely temperament. He is curious and self assured and just loves to be around people. He will come to greet you at the gate but if you don’t, he will certainly call you.  As a yearling, he has kept his charisma that makes you want to be around him all the time.  He is just so adorable.  He will fulfill the dream of someone looking for a long time relationship with an upper level prospect.

Born in Holland, Dragon's dam was imported by Majestic Gaits and brought in Canada as a two years old. Zalante has a wonderful disposition, she is curious, bold and intelligent. She learns fast and observers have commented on her wonderful temperament and amazing work ethic. She shows an expressive forehand and a good supple uphill movement in the trot. She was awarded First Premium and ranked 3rd tie in the TOP TEN in Norht America 2006 Keuring Tour.

Zalanta comes from the great YRANTA mareline 93, (fokfamilie 24). This mareline has been ranked 8th in the top 25 female family rankings in the world for the production of showjumpers . Her dam,  Salanta Keur Elite is by Goodtime Keur known to be an all around producer of  super movers with powerful hind quarters.  He is the sire of Tilders Gabanta, an International jumper who produced the amazing Cantos. Zalanta dam line is an impressive list of the highest predicate that KWPN has to offer. Her grand dam and great grand dam were awarded all three mare top titles, Keur , Preferent, Prestatie. Her two times and three times great grand dams were Model Preferent. This mare line is a continuum of non stop producers. Several Grand Prix jumers as Tavanta Weering and the remarkable Grand Prix jumping mare Oranta ridden  by Chris Kappler comes from this line which also produced the approved KWPN stallions Interpol (Marco Polo), Plutus (Marco Polo), Warrant (Numero Uno), the KEUR awarded Renville (Courville xx), Adios (Legaat), NWP approved Spartaan (Sinaeda), Staalmeester (Sinaeda), AES approved Nashua (Iroko), several second,  third round stallions and National jumpers. 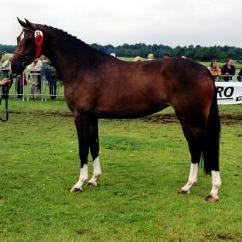 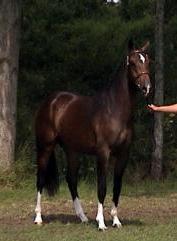 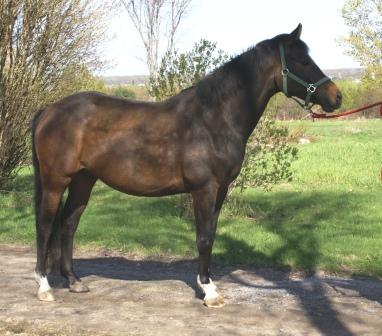 The Horse magazine named Flemming in their list of the Great Stallion of all time: Flemmingh has all the great jumping names on his pedigree. His dam line combines the blood of the French import Cor de la Bryère with the Holstein Farnese and a double dose of Thoroughbred on his grand-dams line.

Flemmingh placed third in his performance test in 1990, scoring three 9s, including a 9 for jumping. In the 1992/3 edition of Jacob Melissens The Leading Sires of The Netherlands, Flemmingh is described as having fine movements, an active, roomy walk, a rich trot and a good canter. He is a careful jumper with a lot of talent. He showed to be a willing worker and never seems to tire. In the jury report, Flemmingh was described as having sufficient talent in dressage and a lot of promise as a jumper. His first offspring are distinguished by their size and splendid movements. But even so the promotional photo, shows Flemmingh over a jump, fourteen years later, the jump shot has gone and the emphasis is on Flemmingh the dressage sire. And with good reason;  two of his sons, Krack C and Lingh have competed in the Dutch dressage team. In there are dozens competing at a national level, and Flemmingh has been a successful sire of young horse competitors  Wladimir was the champion of the Swedish 3 year old dressage horses, while Up To Date was the champion of the 5 year olds in the . Flemmingh is currently ranked in the top ten dressage sires in the world and First in the . Flemmingh's dam also produced three other approved sons: Gaspari I and II and the Holstein Champion Litorio. is a daughter of Carneval who is a proven sire. Flemmingh is line-bred to Ladykiller xx through Lacapo and Lorenz, a practice employed in Holstein breeding to reinforce and increase the percentage of proven talent in the bloodlines.

Lacapos sire Landgraf I by Ladykiller xx is a top source of all-round competition talent in the breed. He has over 30 offspring currently jumping at top International level including: Libero H, Taggi, Major Wager and is the sire of the international dressage horse Lugano 140. His total progeny winnings to date are over £2.5 million. 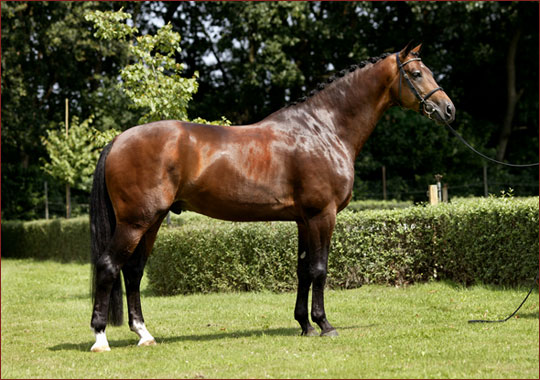 Rousseau's remarkable success is exemplified by the fact that out of his first four foal crops coming of age for stallion licensing in the Netherlands, Rousseau has produced three Champions of the KWPN Stallion Show: Wamberto (2006), Zagreb (2007), and Ajong (2008). In the Netherlands to date, Rousseau has eleven licensed sons. In addition, from his first foal crops coming of age for licensing in Germany, Rousseau already has two licensed sons, Fiorano who was named to the Premium Ring at the Hanoverian licensing in Verden and a Rousseau-Weltmeyer son who was licensed in the later testing and now stands at Celle. With National Champion mares in the Netherlands and top foals around the world, we are just beginning to appreciate the extent of his influence.

Through his win of the Silver Medal at the 2003 FEI World Championships for Young Dressage Horses, Rousseau became an internationally respected name. With his outstanding production in both the Netherlands and Germany, Rousseau has established himself as a reliable producer of Champion stallions, mares, riding horses, and foals across the breeds. He has proven that he has the elite athletic ability and keen mental focus to handle both an elite sport and breeding career.  A top class stallion who reliably produces top class offspring,